Last Tuesday a small session was organised with Gabriel, Eric, Simon and Simon’s girlfriend attending. First time fishing this particular spot but it was a spot we had known about for a while which produces good size Groper and Drummer.

Eric who is still fairly new to fishing has quickly fast tracked himself years of experience in a short time. He has already landed a 77cm Blue Groper on his 3rd attempt and recently for the past consecutive days has fished this spot. He told Gabriel and I that he had landed some big Browns up to 73cm and lost a big blue Groper at his feet which busted off his 100lb trace at the last second after he had it surfaced. Eric was fishing the Surf Tiger #40 with Saltiga 6500 with Saltiga 12 PE 8 113lb Braid joined to 100lb trace but in his defence he mentioned his trace had minor damage on it from snagging a few times.

The Report
The session started from the night before when we went to collect crabs at a local ledge. Timing it with the low tide we were able to easily collect our red rock crabs and a few fist sized snails and shellfish which turned into a nice meal after the session. Had a code red crisis when I got back home when I lifted the lid to separate the snails/shellfish from the crabs and 4 crabs escaped. These things are very fast and its 2am I’m chasing crabs around the kitchen trying to get them back in. Similar to 10~11 years ago when I got back from Eel fishing with an esky full of eels and they had escaped and I had 10 eels running around on the tile floor trying to get them back, it was like a scene from the movie Snakes on a Plane for anyone that’s watched it.

Wasn’t feeling the best with no sleep and also I was (and still am) sick with the cold since Sunday night. I packed light, just a single rod and a backpack as I knew we would have to walk in 30min to our ledge. Went into the session with the mindset of landing an 85cm+ Blue as this was the first time in a long while I had decided to ditch the ISO rod and fish with the #30 Surf Tiger. Was talking to Eric the night before when we were collecting crabs but depending on the location and conditions, rather than the first light period the big blue Groper prefer to come out around the 8:30am~10am time so we made the plan to use the green crabs first and save the red crabs for when the prime fishing time came.

As soon as we got to the ledge, I began to strip some braid off my 6500 Saltist so I could top shot some 80lb Jinkai on top and after I finished rigging up and was testing my drag I discovered a hiccup as the roller on the bail arm was damaged with a slight cut which severely chaffed the line every time I pulled the drag out. I haven’t used this reel in years as I gave it to my father and looks like he hasn’t been looking after it very well. After wasting 40m of 80lb Jinkai (as I chaffed most of the line before I discovered what was causing the damage) I took off the Saltist 6500 and put on the Catalina 4500 with 60lb Saltiga Braid and top shotting it with the last 10m of 80lb JInkai I had left.

As expected the morning period was very quiet with only multiple Wirrah Cods being landed, some of them were good sizes and they are always a good sign as you know there is a Groper cave nearby. I had a few hits which felt like small to medium size browns but they were being very shy and I pulled the hooks on them.
Finally around 9:30am the sun had started to come out from behind the clouds and I picked out a nice size red rock crab, cracked the shell to ensure maximum smell from the mustard (I always make sure to do this) and lobbed to the edge of a submerged rock with red weed. Immediately within seconds of hitting the water I had a very big pull but missed the hook-up. This happened with 2nd crab as well and finally on the 3rd attempt I finally managed to stay connected and I was locked and loaded onto a serious blue Groper. I was a bit worried as normally I like to fish with a top shot of atleast 30m of trace but due to only having 10m of trace left from the issue with the Saltist, I had only about 4m~5m of trace as I kept on cutting off the damaged parts throughout the session and I had to be careful to not let the braid touch the rock as 60lb especially with Saltiga Braid is very thin.

I managed to stop the first dive by keeping the Surf Tiger up and solidly planting the butt of the rod on my lower ab area to fully utilize the maximum load of the blank. I shortly managed to get a few pumps in but being careful not to overwind as I knew the Groper would be taking a second power dive soon and it did as expected. This run was far more powerful than the first one and managed to take about a 1m of drag on a 90% locked up reel. I managed to stop this run as well and that’s when I called Eric for the net. During this time, it was a standoff between the Groper and I where I couldn’t wind any line in and the Groper wasn’t budging almost similar to being snagged but it was just the sheer weight of the fish resisting to come in. After holding off for around 4~5 seconds the Groper started running in towards my feet and went for another hail mary power dive which was equally as strong as the 2nd run. Once again the Groper managed to pull another 1~1.5m of line from the 90% locked drag on the Catalina 4500 with 80lb trace. This time I had to bend my knees and slightly walk forward into the knee deep water to keep the line clear of the edge. After holding off for a few more seconds like this I finally managed to stand up from my knees and slowly pump the fish up and got him to the surface. This is where the comedy begins and possibly one of the most funniest things I’ve seen whilst fishing. Eric who has a knack for getting a bit adrenaline pumped and overly excited when a big fish is on the line comes barging in with the net and falls into the water. He’s now standing in the water waist deep trying to net the fish but the swell knocks him over again and as he has never used the ISO net before he is confused as the ISO net keeps extending by itself (due to the swell pushing it) and is having trouble handling the net whilst at the same time falling into some hole/gap in the water for a 3rd time as he can’t see under the water due to the wash. During this time I had backed off my drag completely and was manually controlling the fish by palming the spool and releasing (lever-brake reel here would have worked wonders) when necessary as I could see the hook just pinned on the edge of the mouth. Luckily the swell pushed the Groper into the corner of the ledge behind a submerged rock and I think in the end Eric just netted the fish by grabbing the actual net frame and pushing the Groper into the net with his hand haha. Once the fish was in I went over and grabbed the net from him and helped him up. The situation was by all no means highly dangerous as we were an area where the swell was sweeping past with minimal power but it was extremely funny to watch.

Upon landing the fish we called out to Gabriel and Simon and the reaction of their faces was priceless as they weren’t quite sure what to expect when we told them to come over. I managed to keep it in a large rock pool before Gabriel was ready with the camera. We took a few snaps and also measured it on the Daiwa tape and it went 79cm, 1cm shy of the 80cm mark but it is what it is. Not the 85cm+ I came for but still not a bad result especially as I wasn’t feeling all that well with the cold and zero sleep. We released the fish after, although it did stay on its side and flap around a bit (that was my bad as I should have revived it in the rock pool a bit longer) but in the end he revived himself in the wash and kicked back down.

After that I packed up as I got what I had come for and was buggered from the sickness and lack of sleep and also needed to save some energy for the 30min walk back through sand hills. Gabriel and I rarely if not ever take a break when walking to or out of a spot but even the minimal gear we were carrying we had to stop in the middle to take a 2min breather. Definitely do not want to take back a 10kg+ Groper or else it would have been the biggest mission.
Overall it was a slow session for everyone and I think apart from that Blue Groper and Wirrahs there was nothing else much caught. Not the 85cm+ Blue I came for but better than going home empty handed. Next up is an 85cm+ Blue on ISO gear. 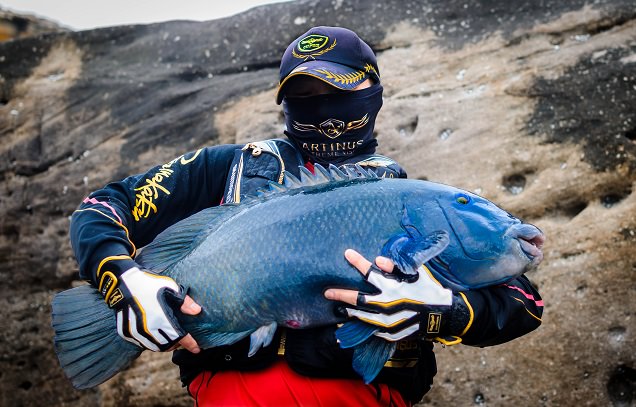 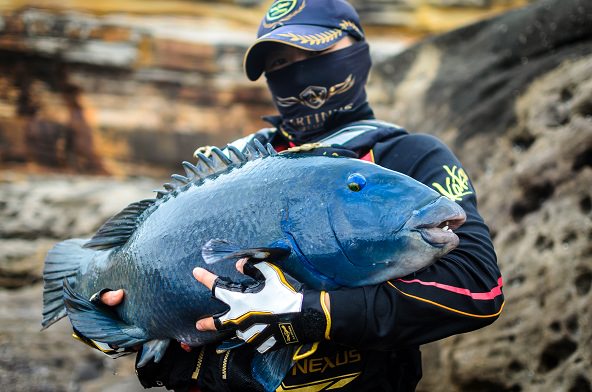 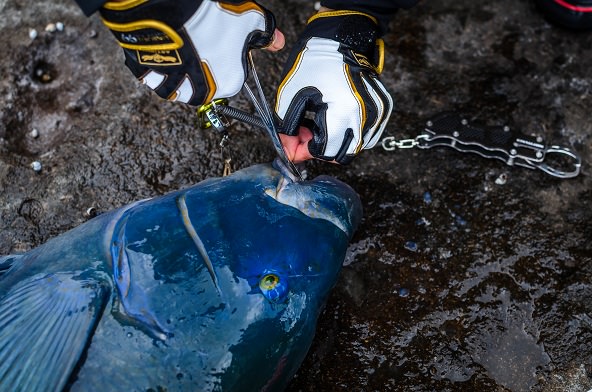 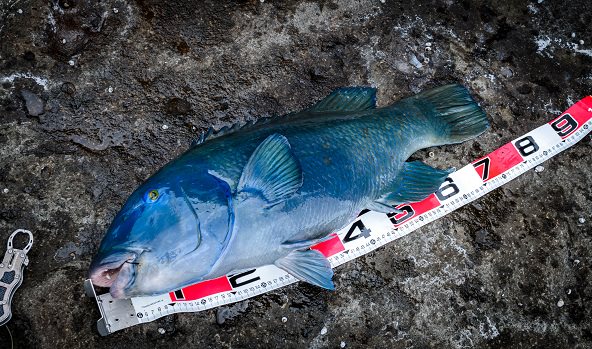 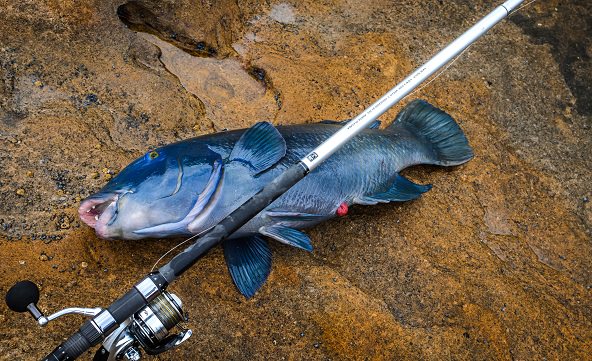 2 photos taken from my phone 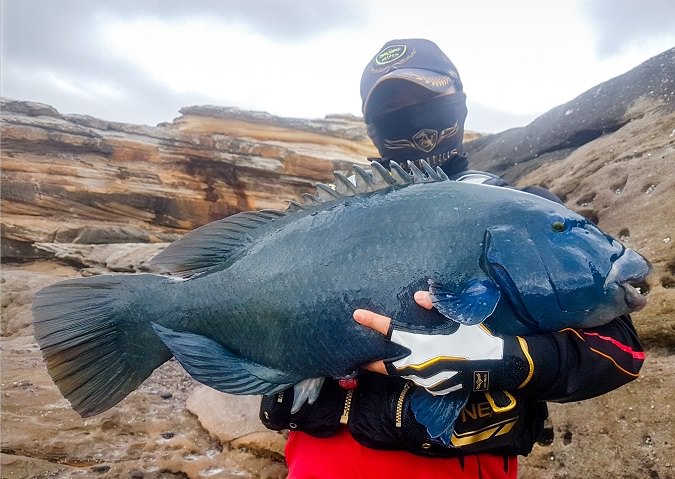 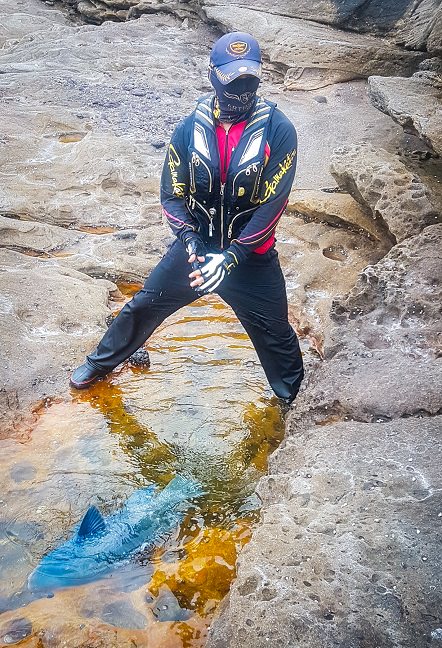