or make 4 interest-free payments of $244.75 AUD fortnightly with

Ripple Fisher's jigging rod series "Selfish" will be renewed in 2020. Three new spinning models and two bait models will be released as new models, and each model will be a model developed with a new concept. Positioning 3 models of conventional models 613S, 614S, 597S as vertical main models, categorizing 3 new spinning models as diagonal pulling compatible NS (natural swim) and 2 new bait as SEB (sensitive bait). ..
These additional new models are models for responding to the complicated jigging scenes of the current jigging scene, and it is possible to surely sublimate the action such as making the jig bounce, swim, move finely into the appeal of “feeding” I knew it. Of course, the slender and lightweight characteristics of SELFISH, the sense of cutting the tide with a sharp operation feel, and the strong bat power that contradicts the usability are further sharpened.

■NS (Natural Swim)
NS632 / NS623 / NS614
A series that specializes in the ability to swim jigs naturally , as the angler wants, without causing the jigs to bounce too much. A multi-purpose model that flexibly responds to a wide variety of sea conditions and areas and captures selective conditions.

It is a comparison of rod bending under the condition that a static load of 3 kg is applied to the Selfish series and Ocean Arrow 5 series.
The SELFISH NS is a model that emphasizes swimming action, and since it is a type of rod that allows action on the waist of the belly without playing too much jig on the tip, the tip and the belly are designed to bend to the bat power.
The bait model SELFISH SEB has a certain amount of tension on the tip to support fine action, but it has general-purpose performance that allows you to swim with your belly's waist depending on the angle.
The basic model, which is a conventional model, can handle high pitch short jerk to one pitch jerk, but it is designed for vertical jigging main, and if the line becomes too oblique, the tension tends to drop.
The Ocean Arrow 5 series is a very tenacious blank that is compatible with amberjack and bluefin tuna. 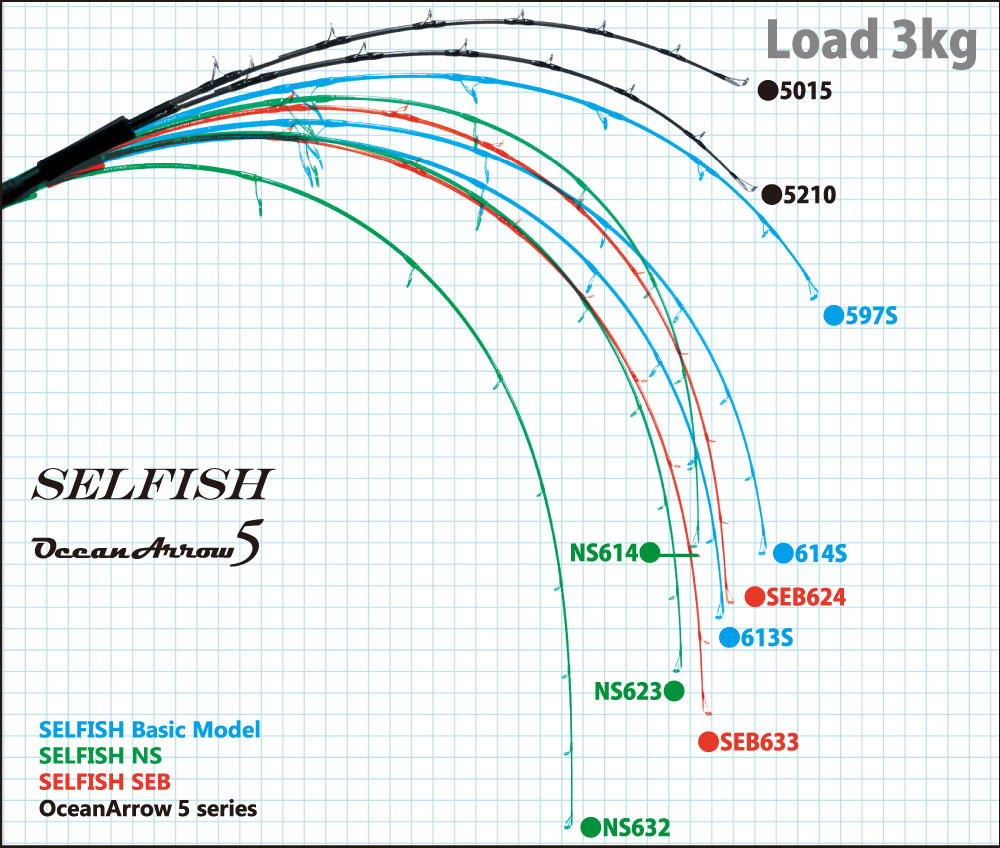 Ripple Fisher Selfish NS614
NS614 is a technical model specializing in making selective hiramasa use its mouth with the main target being large hiramasa lurking in a shallow area of ​​20 to 40m represented by Sotobo.
It has a highly sensitive tip that suppresses repulsive force, and a belly that has a tension that makes it easy to detect changes in jig behavior, allowing you to control the slide width of the jig as you wish.
It is easy to switch the range and action with good response according to the ever-changing situation, and the bat power of line class or higher can control the large flatfish even if you fight with the grip between the sides.
It also has the ability to cast long distances in the undercast, and can advantageously develop games on the tide of a fishing tide coming in, condensing all the performance required for jigging in the shallow area.

◎Applicable reel standard・S: 6000~8000 / D: 4000~4500
Grip length / A: 607mm (grip length) ・B: 482mm (from grip end to reel foot)
Blank tip diameter / 2.1mm (directly under the top guide) ・Blank original diameter / 9.2 mm (the original diameter is the outer diameter of the fishing rod main body from the bottom of the rod to 645 mm)
Reel seat / DPS18 (Fuji) up-lock
grip end / EVA specification
*Comfort Weight is the most comfortable lure weight to use with that rod It is a notation. Please note that it is not the maximum value used.